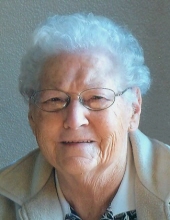 Maxine Johnson, 89 of Webster died Saturday April 12, 2014 at Bethesda Home in Webster. Her funeral will be 10:30 A.M. Wednesday April 16, 2014 at American Lutheran Church in Webster; Rev. Jan FitzGibbon will officiate. Burial will be in the Webster Cemetery. Visitation will be Tuesday 5 – 7 P.M. closing with a 7 P.M. Prayer Service at Fiksdal Funeral Service. Maxine was born on August 25, 1924 in Sisseton, SD to Otto and Bertha (Carlson) Donat. She resided in Ortley, SD until they moved to Webster where she lived her entire life. She married Raymond Johnson on January 1, 1946 at American Lutheran Church in Webster. Maxine was a homemaker and mother until her children were grown. She then began employment at the Treasurer’s Office in the Day County Courthouse, and later worked at Dacotah Bank where she enjoyed greeting customers with her smile every day and retired from the bank in 1993. Raymond passed away in 1987 and Maxine continued to live on the farm until eventually moving into Downtown Manor where she enjoyed visiting with her sister, Toots, and many other friends. She decided that retirement was not a fulfilling pastime, so she began working as a paraprofessional helping many young children with reading and math skills at Webster Elementary School. American Lutheran Church was a very important part of her life. She was an active member of Ladies’ Aid, sang in the church choir and spent her time helping others. She was also involved with the museum, serving on its board and assisting in the setup of many exhibits. Throughout her life, Maxine’s greatest joy was spending time with her children, grandchildren and great grandchildren. Maxine loved to crochet blankets, bake treats like cookies, kringla, and lefse. Christmas was a favorite time of year and she would spend weeks preparing all of the goodies, making and buying gifts and decorating the house in anticipation of time spent with loved ones. Mom was a very giving person who always greeted everyone she met with a smile and a “Hi.” She spent many hours attending wrestling matches, concert choir performances, band concerts, and basketball games. She was an avid Twins baseball fan and never missed watching a game on TV. Maxine is survived by her three children, Colin (Joanita) Johnson of Webster, SD Lance (Dina) Johnson of Milbank, SD, and Deborah (Paul) Canton of Grand Forks, ND. She is also survived by her grandchildren: Russell Johnson of Grenville, SD, Corey (Janelle) Johnson of Sioux Falls, SD, Gordon (Andrea) Canton of Moorhead, MN, Chris Johnson of Webster, SD, Sarah (Ryan) Wilhelm of Sioux Falls, SD, Briana Johnson of Webster, SD, Kelsey Johnson of St. Paul, MN, Megan Johnson of Brookings, SD, Tyler Johnson and Jared Johnson of Milbank, SD. Great-grandchildren include Mikaela Johnson, Sarianna and Spicer Johnson, Mackenzie Canton, Kenlee and Kolee Johnson, Haeden Spiering, Braxton Marler, Andi Carpenter, Knox Wilhelm, Maci and Tayten Kurkowski. Maxine is also survived by her sister Cecelia (Toots) Gregerson of Mississippi, three nieces and 2 nephews, and her many friends. She was preceded in death by her husband, Raymond, in 1987, a brother Roy, sisters-in-law Nelvina Donat, Ruby Hord, Charmian (Johnson) Teiten, brothers-in-law Raymond Gregerson, Verne Hord, Melbourne Johnson, and James Teiten. Mom was a gift to all who knew her. We smile because she lived and was a part of our lives, an angel who is now watching from above.
To send flowers to the family in memory of Maxine E. Johnson, please visit our flower store.