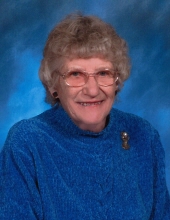 Norma J. Richardt, 85, of Webster and formerly of Waubay passed away Sunday February 28, 2021 at Bethesda Home in Webster. Private funeral services will be held 10:30 A.M. Wednesday March 3, 2021 and will be livestreamed on Fiksdal Funeral Service Facebook page. Walk thru visitation will be Tuesday 5-7 P.M. at the funeral home. Burial will be at the Ortley Cemetery at a later date. Norma Jean Leimkuhl was born on August 19, 1935 to William and Anna (Schmig) Leimkuhl in Waubay, South Dakota. She was baptized and confirmed at Zion Lutheran Church in Waubay. She attended country school near Waubay and later graduated from Waubay High School in 1953. After her education she moved to Minneapolis and worked for a short time. She married Maurice Richardt on November 3, 1956 at Zion Lutheran Church in Waubay. The couple lived in Minnesota, Iowa, Ortley, and then moved to Waubay in 1971. Norma ran an in-home daycare until 1996. Maurice passed away on November 10, 1995. Norma continued living in Waubay. She worked at Bethesda Home until her retirement. She moved to Bethesda Home in 2019. Norma passed away on Sunday, February 28, 2021 at the age of 85 years, 6 months, and 9 days. She will be missed by her three children, Craig Richardt of Spokane Valley, WA, Kimberly Richardt of Sioux Falls, SD, and Dawn Richardt of Aberdeen, SD; one sister, Doris Kohlhoff of Watertown, SD; four grandchildren, Dan (Emily) of Aberdeen, SD, Jessica and Nathan of Spokane Valley, WA, and Kayla of Sioux Falls, SD; and 6 great-grandchildren. She is preceded in death by her parents, husband, two brothers, and four sisters.
To send flowers to the family in memory of Norma Richardt, please visit our flower store.