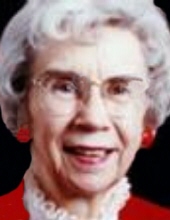 Norma Strommen 89 of Rapid City and formerly of Webster died Saturday February 28, 2015 at a care center in Rapid City. Her funeral will be at 1:00 P.M. Saturday, March 7, 2015 at Fiksdal Funeral Chapel in Webster, Rev. Daniel Ostercamp will officiate. Burial will be at Webster Cemetery. Visitation will be at the funeral home on Saturday one hour prior to services. In lieu of flowers, the family asks that donations and memorials be made to The Gideon's International. Norma G. Jeske was born February 21, 1926 in Webster, South Dakota to Theresa and August Jeske. She attended Lily Elementary and High School and graduated in 1944. She attended Sioux Valley Nursing School in Sioux Falls and worked as a nurse in Watertown and Webster. On December 18, 1949 Norma married Ivan Strommen. They raised six children and lived in North Platte, Nebraska, and Madison and Huron, South Dakota. Norma was very involved in church activities and other ministries including choir, Gideon Auxiliary and National Right to Life. She also worked at Huron Nursing Home. Norma and Ivan retired and moved to Rapid City in 2001. Norma G. (Jeske) Strommen went to be with the Lord on Saturday, February 28th, 2015 at GoldenLiving Center-Meadowbrook in Rapid City, South Dakota at age of 89 years and 7 days. Norma is survived by her six children: One daughter, Joan (Joseph) Ferro of Hot Springs; five sons, Jerry, John (JoAnn), Jeffrey, Gregory, all of Rapid City and Richard of McKinney, Texas; four grandsons: Sam, Jeremy, Joshua and Graham Strommen; one sister Carol Lien of Watertown, two sisters-in-law, Alvina Jeske of Webster and Delores (Glenn) Gulsvig of Bloomington, Minnesota, and numerous nieces and nephews. She was preceded in death by her parents, one sister Evelyn Chambers (and husband John), two brothers, Milton and Wesley (Bud) Jeske (and wife Gladys) and brother-in-law Kermit Lien.
To send flowers to the family in memory of Norma Strommen, please visit our flower store.