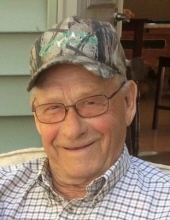 Funeral services will be 10:30 A.M. Wednesday November 17, 2021 at Fron Lutheran Church near Roslyn. Interment will be in the church cemetery.

Visitation will be Tuesday 5-7 P.M. closing with a 7P.M. prayer service at the funeral home.

Tubby was born June 19, 1933 to Paul & Nila (Krause) Schmidt. He was baptized and confirmed at Fron Lutheran Church. Tubby attended and graduated from Roslyn School in 1951. He was active in basketball, track (discus). He also was the pitcher for the Roslyn Baseball Team.

He married the love of his life Shirley Maye Eidahl on September 15, 1952. Tubby and Shirley lived on multiple farms northwest of Roslyn and raised three children, Keith Douglas Schmidt – born August 13, 1953; Marcia Renae Schmidt – born August 2, 1954; and Craig Allen Schmidt – born September 17, 1956. Tubby was a very hard worker and would often work the farm in the evening, after his day job was complete. The couple settled in Roslyn in 1964.

In the mid 1960’s Tubby started his meat cutting and butchering career working for Coyne’s Meat Market in Roslyn. After Tubby spent a short time working in Jamestown, ND (which the family was not very excited about) Tubby found work at the Jack and Jill Store in Webster owned by Ron Hammitt. He was the manager of the meat department. Tubby and Shirley both worked in Webster for about eight years before they bought the meat market in Roslyn with their son Craig. In 1992 Craig bought the meat market solely, Tubby drove truck for employers like Hanson Farms, the Roslyn Elevator, and worked also part-time for the Town of Roslyn.

Life was not all work and no play for Tubby. One of their adventures included purchasing a lake cabin on Pickerel Lake, where Tubby would most certainly be found fishing or pulling his grandchildren skiing. He loved his grandchildren and great-grandchildren immensely and was very proud of each and every one of them.

Shirley passed away on September 15, 2014, the day of their 62nd wedding anniversary. Tubby lived in Roslyn in his home where he hosted the infamous Wednesday at Tubby’s where many friends and family would gather for belly laughs and cocktails. He loved driving his side-by-side all over town every day, you maybe even passed him once or twice. He also enjoyed his afternoon coffee with his friends at Schmidt Custom Meats. He was a mail carrier for a few in town and he also mowed lawn for people until the very end. There isn’t anything he wouldn’t have done for anyone who needed help.

Tubby was a lifelong member of Fron Lutheran Church where he baptized and confirmed and married. He served on the church council, and taught Sunday School. He also helped with many projects held to upkeep the church. He was very active in the community of Roslyn. He was Fire Chief for 10 years, he drove bus for Roslyn School, he coached baseball for about 10 years, he alsowas a Mason and member of the Yelduz Shrine. He was active in the Roslyn Booster club and was voted Man of the Year by the Tri-City Jaycees in 1982. He was on the Roslyn Community Development Board and the Strand Kjorsvig Rest Home Board.

His kindness showed up in everything he did. If you knew Tubby, you were his friend. He made everyone feel welcome – he was gentle, caring, funny, respectful and down-to-earth.

To send flowers to the family in memory of Norman "Tubby" Schmidt, please visit our flower store.