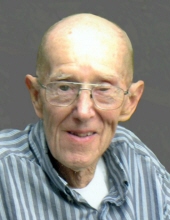 Olynn Fossum, 85 of Wilmot and formerly of Pierpont died on Tuesday, October 07, 2014 at the Wilmot Care Center in Wilmot. His funeral will be at 10:00 A.M. Saturday, October 11, 2014 at Fiksdal Funeral Chapel in Webster, Rev. Steve Hammer officiating. Burial will be at Homer Cemetery near Pierpont. Visitation will be at the funeral home on Friday 4-6 P.M. and prior to services on Saturday. Fiksdal Funeral Service of Webster is in charge of the arrangements. Olynn Melvin Fossum was born on Friday, January 11, 1929 to Selmer and Olga (Tastad) Fossum at Pierpont, South Dakota. He attended school in Pierpont and graduated from Pierpont High School in 1947. In 1952 he enlisted in the U.S. Army where he served in Germany during the Korean War. He was honorably discharged from the service in 1960 and returned to Pierpont. He was united in marriage to Avis Wilcox Hammer on August 30, 1961 at Pierpont, South Dakota. After their marriage the couple made their home in Pierpont where he owned and operated a Sinclair Service Station named High Grade Service for many years and also worked for Cenex in Pierpont. Avis passed away in 2006. After her death he remained in Pierpont, where he was a life-long resident, until entering the Wilmot Care Center in Wilmot in June 2013. Olynn was a member of Bethlehem Lutheran Church in Pierpont where he served on the Church Council. He also served on the Pierpont City Council, was Mayor of Pierpont for many years and was a member of the Pierpont Fire Department. He also was a 60 year member of Charles N. Young Post 99, American Legion of Pierpont. He enjoyed going up town for coffee and visiting with people at the café, sightseeing out in the country and going to Texas each winter during his retirement years. Olynn passed away on Tuesday, October 7, 2014 at Wilmot, South Dakota at the age of 85 years, 8 months and 26 days. Survivors include his children, Mike (Neila) Hammer of Baton Rouge, LA, Steve (Beth) Hammer of Chaska, MN, Luan (Duane) Axtness of Brookings, SD, David (Sheri) Hammer of Wilmot, SD and Carolynn (Brian) Nelson of Bowdle, SD; one sister, Ann Wiltfang of Kansas City, MO; nine grandchildren and eight great grandchildren. He was preceded in death by his parents, wife and one brother, Jim.
To send flowers to the family in memory of Olynn Fossum, please visit our flower store.