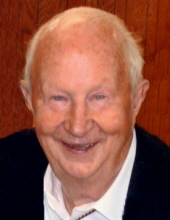 Paul Kuecker, 81 of Webster died on Saturday, January 09, 2016 at Sanford Hospital in Webster. His funeral will be at 10:30 A.M. Thursday, January 14, 2016 at United Methodist Church in Webster, Rev. Ken Ballard will officiate. Burial will be in Webster Cemetery Visitation will be at the funeral home on Wednesday 5-7 P.M. ending with a 7 P.M. Prayer Service. Paul Kuecker was born on Sunday, October 7, 1934 to Edwin and Lillian (Ericson) Kuecker on the family farm in Morton Township, Day County, South Dakota southeast of Webster. He was baptized and confirmed at the United Methodist Church in Webster. He attended Morton District 112 country school and graduated from Webster High School in 1953. He then attended the Ag School at South Dakota State College in Brookings where he graduated in 1955. After graduating Paul returned to the family farm, along with serving 8 years in the South Dakota National Guard, and was honorably discharged. On June 30, 1962 he was united in marriage to Shirley Van Sickle at Watertown, South Dakota. The couple made their home on the family farm where Paul farmed with his father and brother. After a few years, Paul and his brother, David, formed Kuecker Brothers where they operated a dairy and grain farm and expanded into the certified seed, grain and fertilizer business. Paul retired from farming in 2005 and the couple moved to Webster in 2006. Paul was an active member of the United Methodist Church in Webster where he had served on the church council and was active in many other activities. He was a Morton Township Board member, Webster School Board Member for 15 years and Lake Area Vocational President in Webster. He was a former 4-H member and supporter, FFA member, Farmers Union delegate and a member of the South Dakota Oilseed Council, member of the SD Corn and Soybean Association, National Sunflower Association, SD and Day County Crop Improvement Assn. He enjoyed collecting cast iron implement seats and was a member of the Cast Iron Implement Seat Association. He also liked going to auction sales, fishing, hunting, playing cards, the Brooklyn Dodgers and attending his grandchildren’s activities. He also enjoyed spending time with his family at Pickerel and Enemy Swim Lake. He was a lifelong Webster Bearcat fan, Minnesota Twins, Minnesota Vikings and Jackrabbit fan. He was an avid coffee drinker and would invite you in to have a cup with him and have some laughs. Paul passed away on Saturday, January 9, 2016 at Webster, South Dakota at the age of 81 years, 3 months and 2 days. Survivors include his wife Shirley of Webster; four daughters, Jody (Kevin) Wall of Breckenridge, MN, Barb Sitter-Kuecker (fiancé, Shane Kilgore) of Aberdeen, SD, Amy (Darwin) Knutson and Nikki (Lonnie) Amundson both of Webster, SD; three brothers, Ed (Mary) Kuecker, David (Debra) Kuecker and Roger (Carol) Kuecker all of Webster; one sister, Betty (Jim) Glosimodt of Watertown, SD; twelve grandchildren, five great grandchildren and many nieces and nephews. He was preceded in death by his parents, two brothers, John and Charles, and one sister, Mary Ann Olson.
To send flowers to the family in memory of Paul Kuecker, please visit our flower store.