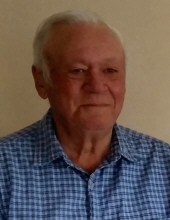 Percival "Percy" Monson, 90, of Webster, passed away on Monday, June 28, 2021 at Bethesda Home in Webster. Funeral Service will be 11:00 A.M. Saturday July 3, 2021, at Fiksdal Funeral Service. Service will be livestreamed on Fiksdal Funeral Service website and Fiksdal Funeral Service Facebook page. Pastor Mike DeKraai will officiate. Luncheon will follow funeral service. Burial will be at Fron Lutheran Cemetery near Roslyn, SD. Visitation will be from 5-7 P.M. on Friday, July 2, 2021, at Fiksdal Funeral Service. Percival (Percy) Eldon Monson was born on Monday, March 16, 1931, to Peter and Inga (Kleven) Monson in Britton, SD. The family lived on a farm northwest of Roslyn, SD. He was baptized and confirmed at Fron Lutheran Church near Roslyn and attended country school through the 8th grade. He began farming at the age of 15 with his mother, Inga and his brother, Elwood, after their father passed away in 1946. Percy served in the United States Army from August 1952 through August 1954 when he was honorably discharged. He returned to Roslyn to continue farming with his mother and brother Elwood. On October 28th, 1956, he was united in marriage to Murtis Roth at the Andover Methodist Church. After their marriage, the couple made their home on a farm northwest of Roslyn. In 1960 they moved to Webster where he began hauling canned milk for Webster Creamery and later, bulk milk for AMPI. Percival hauled milk for 17 years, and sold his business in 1977. At that time, he began working for the City of Webster Street Department. He then worked for Day County until his retirement in 1996. He was a member of St. John’s Lutheran Church in Webster. Percy enjoyed refinishing furniture, hunting, and fishing with his friends, and spending time with his children and grandchildren. He had many talents, doing mechanic work on his milk trucks and cars and did electrical wiring and carpentry work at his home. After his retirement, he enjoyed gardening, grilling, and cooking. Most recently, he enjoyed spending time on his deck, simply enjoying the outdoors. Percy passed away on Monday, June 28th at Webster, South Dakota at the age of 90 years, 3 months, and 12 days. Survivors include one son, Steven (Dawn) Monson of Webster, SD; two daughters Shari (Daryl) Petri and Patti Monson, all of Sioux Falls, SD; grandchildren, Alissa, Megan and Katie Petri of Minneapolis, MN; one sister, Orlean Lardy, Milbank, SD; one brother, Roger (Sharon) Monson of Albuquerque, NM. He was preceded in death by his parents, his wife, Murtis, an infant son, Jeffrey, and a brother, Elwood.
To send flowers to the family in memory of Percival "Percy" Monson, please visit our flower store.