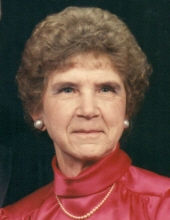 Rita Waddel 90 of Webster died Tuesday January 13, 2015 at Bethesda Home in Webster. A memorial service will be held 2:00 P.M. Tuesday May 26, 2015 at Bethesda Chapel in Webster. Burial will follow at the Webster Cemetery. Rita Haverland was born on Saturday October 25, 1924 to Charles and Lillian (Peuschel) Haverland at St. Paul, Minnesota. She was baptized Lakeville, Minnesota and confirmed at New Richmond, Wisconsin. She graduated from New Richmond High School. After her education she moved to St. Paul Minnesota. In 1949, she married Earl Royce at Boyertown, Pennsylvania. The couple then moved to Watertown, South Dakota and then settled in Webster, South Dakota in 1957 following Earl’s retirement from the Navy. Earl passed away in 1970. In 1971, Rita was united in marriage to Roger Waddel. Rita worked as a Home Service Advisor for the Northwestern Public Service Company until her retirement in 1988. Many people remember Rita for teaching cooking classes in the elementary schools in her service area as a Home Service Advisor. She was a very active member of the American Lutheran Church in Webster. She was also a member of Red Cross Grey Ladies and volunteered in many aspects at the Bethesda Home for most of the years she lived in Webster. She was also recognized as the Volunteer of the Year Award. She was an avid reader; she enjoyed cooking, baking, and spending time with her family and friends. She is survived by daughter Wendy (Gene) Grode of Albuquerque, NM; sister Charlotte Reitnauer of FL; four grandchildren Cory (Andi) Grode, Jeanette Grode, Sylvan LaCross and Logan LaCross, sister-in-law Jean (Harold) Miller, brother-in-law Bill Lass, and several nieces and nephews. She was preceded in death by her parents, her husbands, daughter Pat LaCross, brother Bruno Haverland, sister Lois Wickstrom, and sister-in-law Marilyn Lass. In lieu of flowers, the family requests any donations be made to the American Lutheran Church 121 West 7th Ave Webster, SD 57274 or Bethesda Home 120 West Hwy Webster, SD 57274
To send flowers to the family in memory of Rita Grace Waddel, please visit our flower store.