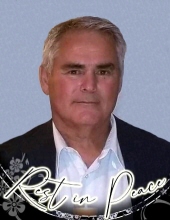 Rodney Barse, 66, of Waubay passed away Friday August 27, 2021 at Sioux Falls. Funeral services will be 10:00 A.M. Tuesday August 31, 2021 at Fiksdal Funeral Service in Webster and will be livestreamed on the website. Burial will be at Lakewood Cemetery near Waubay. Visitation will be Monday 5-7 P.M. closing with a prayer service at the funeral home. Rodney Ray Barse was born on March 17, 1955 to Maurice and Delores (Olson) Barse at Sisseton, South Dakota. He was the third born of 12 children. He attended school in Waubay graduating from Waubay High School in 1973. After high school he went on to Black Hills State University, Springfield and Northern State College where he excelled in football. He obtained a degree in sports science. After his college career Rodney worked for the Waubay Police Department and coached football, basketball and he mentored many young athletes over the years.(many were his own nieces and nephews) He then began his own business First Rate Painting until the present. He mentored his nephews in his business also and taught them good work ethics. He was also the District Chairman for Toka Nuwan for two years. He was an avid racer and was very passionate about working on his cars. He was known as the Waubay Wizard and Hot Rod by his racing family and friends. He also loved playing basketball and softball and was known as the BMOSF (Big Man of Sioux Falls). Rodney was a jokester and loved picking on his nieces and nephews and above all else he loved spending time with his family and many friends. Rodney will be forever loved and sadly missed by his son Jason and grandson Travis both of Milbank SD. Justin Pabst of Port Orange, FL who Rodney mentored and held dear to his heart, five brothers; Keith (Dawn) Barse of Ethan SD, Mike (Laurie) Barse of Sioux Falls SD, Kevin (Julie) Barse of Waubay SD, Farlin (Wendy) Barse of Corsica SD, Greg (Tami) Hentges of Castlewood SD, five sisters; Dixie (Jack) Gaikowski of Tucson AZ, Pamela Keeble of Waubay SD, Rita (Kenny) Marx of Waubay SD, Donnietta (Mike) Bernard of Watertown SD, and Kelly (Ed) Robertson of Watertown SD, many nieces and nephews as well as a dear friend Janet Kennedy of Sioux Falls SD. He was preceded in death by his parents, infant brother Jeffery, brother Ronald, brother-in-law Gabe Keeble, niece Julia Keeble and the love of his life Sonja Lien. Active Casket Bearers Christopher Ehlebracht ~ Travis Barse ~ Cody Barse Juston Barse ~ Marcus Barse ~ Curtis Bernard Geoffrey Robertson ~ Jaden Barse Jason Barse ~ Travis Barse ~ Justin Pabst Honorary Casket Bearers Greg Hentges ~ Jeff Jurgens ~ Kevin Larson Kevin Sedocky ~ Denny Haines All of his many racing buddies and family and friends.
To send flowers to the family in memory of Rodney Barse, please visit our flower store.

closing with a prayer service at 7