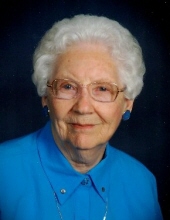 Ruby Holman 91 of Webster and formerly of Waubay passed away Saturday March 17, 2018 at Bethesda Home in Webster. Funeral services will be held 1:30 P.M. Saturday, June 2, 2018 at Fiksdal Funeral Service in Webster, Rev. James Wilshusen of Zion Evangelical Lutheran Church in Waubay will officiate. Visitation will be one hour prior to services. Burial will be in the Lakewood Cemetery near Waubay. Ruby Mae Brigham was born on June 13, 1926 to Lafe and Emma (Minners) Brigham in Waubay, South Dakota. She was baptized and confirmed at Zion Evangelical Lutheran Church in Waubay. She attended school in Waubay and graduated in 1944. After graduation, Ruby worked in Minneapolis, Minnesota at Daytons, Folie, and Scott Atwater. In 1945, she returned to Waubay and took employment at Greenings Drug Store and Humanns Store. On April 30, 1948 she was united in marriage to Virgil Holman at Waubay. The couple made their home in Waubay until 1977 when they relocated to Webster, South Dakota. Mr. Holman passed away in 2010. Ruby continued to live in Webster until her passing. Ruby passed away at Webster, South Dakota at the age of 91 years, 9 months, and 4 days. She is survived by nieces, nephews, and cousins. She was preceded in death by her parents, husband, and two brothers.
To send flowers to the family in memory of Ruby Holman, please visit our flower store.