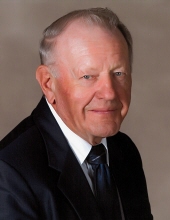 Russell Shoemaker, 95, of Webster, South Dakota passed away on Thursday, February 25, 2021 at Bethesda Nursing Home in Webster. Private Funeral Services will be on Wednesday, March 3, 2021 at 1:00 P.M. and will be livestreamed on Fiksdal Funeral Service Facebook page. Public walk-through visitation will be Tuesday 5-7 P.M. at Fiksdal Funeral Service closing with a prayer service at 7. Family respectfully requests that masks be worn. Russell Fay Shoemaker was born April 12, 1925, in Raymond, SD, to Edward Malcolm and Bessie (Robinson) Shoemaker. He grew up and attended school in Canning, SD, and graduated in 1943. While in high school, Russell was an avid basketball player. His team excelled to the District XVI “B” Third in 1942. As a young man, he spent most of his time working side by side with his dad on the family ranch. He enjoyed ranching and riding horses. You would always find Russell outside whether it was working in the shop, riding horses or mowing. He appreciated the country life. During that time, he acquired a solid work ethic and strong values that were instilled and he lived by throughout his life. On April 20, 1945 he joined the United States Navy. He was a Seaman First/Armed Guard (gunner). He was stationed in Alameda, California. Russell served in the Pacific aboard three different ships, Judah P. Benjamin, Mission San Diego, and Cape Archway. Russell was honorably discharged on October 19, 1946. In 1948, Russell graduated from Ice Flying Service as a Private Pilot. On May 29, 1949, Russell and Doris Elizabeth Wiesner were united in marriage in Clear Lake, SD. They made their home in Pierre. They both were employed for the Public Utilities Commission, Russell as a State Scale Inspector. 1957 brought about change and opportunity for the Shoemakers when they moved to Webster along with Sue and Don Thompson and established Webster Livestock Exchange. The Shoemakers bought the Thompsons out in 1959. In 1973 Webster Livestock Exchange closed down and a new business was created, Webster Scale Sales and Service, now known as Webster Scale, Inc. They both worked at this business for many, many years. Russell semi-retired in 1990. Russell’s son, Roger returned to Webster to work with his dad in 1976, then later with his grandsons, John, Jason and Joel. Russell was elected to serve Day County as a Day County Commissioner commencing January 4, 1965 until December 31, 1972. After his years of service, he decided not to seek re-election but devote his time and energy to the family business. He was a member of the United Methodist Church of Webster, SD and served on the board holding many offices. He was a 4-H Leader, member of the 4-H Club Foundation of South Dakota, Inc., member of the WEB Water Development Association’s Executive Board, and member of the American Legion Post #40 and VFW Post #4690. He was the chair of the Webster Centennial Steering Committee in 1981. He felt privileged and honored to be able to go on the Honor Flight in 2010 to tour the WWII Memorial in Washington, D.C. Russell was devoted to his job and always strived for perfection. His dedication earned him many honors and recognition over the years. He took great pride in the work he did and the friendships he had formed throughout his years of life. Russell enjoyed many things throughout his lifetime from being a trucker and hauling hay, playing in a band, auctioneer, yodeling, and dancing at ballroom dances. Family was the most important thing in his life. He enjoyed traveling with his wife; they were in every state in the U.S. including Canada, Alaska and Hawaii, riding horse on wagon trains and trail rides, attending rodeos, and hanging out in the shop. Later in life, his preferred activity was going to his great grandchildren’s sporting events and watching them become champions on the court, on the mat, and in life. Russell departs this life having touched and enriched the lives of so many. Grateful for having shared his life are: Daughters Elaine (Layne) Hagen, Webster, SD, Dianne (Leroy) Vollan, Zimmerman, MN, son Roger (Teresa) Shoemaker, Webster, SD; grandchildren Joel (Alyssa) Shoemaker, Angela Shoemaker, Charla Shoemaker, all of Webster, SD, Eileen (Jarett) Anderson, Rochester, MN, and John (Lindsey Golz) Vollan, Minneapolis, MN; and great-grandchildren Baron Yexley, Faith, Cade, Trace, Carter, Cara, Cole, Callie, Chayse, Jack, Drake and Huck Shoemaker, Megan and Kendall Anderson. He deeply missed his grandsons, Jason and John Shoemaker. Preceding him in death were his parents; his wife, Doris on January 27, 2002; two sisters Alice Eldridge and Ruth Etzkorn; one brother Ray Shoemaker; and grandsons Jason Shoemaker and John Shoemaker.
To send flowers to the family in memory of Russell Shoemaker, please visit our flower store.

will close with a prayer service at 7pm