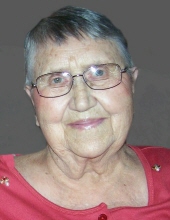 Ruth Wieger 87 of Webster passed away Saturday July 1, 2017 at Bethesda Home in Webster. Her funeral will be 2:00 P.M. Friday July 7, 2017 at Fiksdal Funeral Chapel in Webster. Burial will be in the Webster Cemetery. Visitation will be Thursday 5-7 P.M. at the funeral home and one hour prior to services on Friday.. Ruth Lillian Richter was born on March 5, 1930 to Otto and Lillian (Zubke) Richter in Codington County, South Dakota. She was baptized and confirmed at St. Paul’s Lutheran Church in Henry. The family lived near Henry, South Dakota where she grew up. She attended school near her home and then graduated from Waubay High School. She attended Northern State Teacher’s College in Aberdeen where she received her teaching certificate and taught country school near Waubay. She was united in marriage to Fred Wieger on August 7, 1949 at Henry, South Dakota. After their marriage the couple lived and farmed north of Henry. In 1958 the couple moved to Henderson, Minnesota and then followed Fred’s employment and they lived in St. Peter, Minnesota, Cuthbert, South Dakota, Belle Plaine and Kasota Minnesota. In 1980 Fred retired and they moved to Waubay where she cared for her son, John until he passed away in 1986. She also worked at Head Start in Webster as a teacher’s aide until her retirement. Fred passed away in December 1999. After his death she continued to make her home in Waubay. She enjoyed cooking, gardening, knitting and restoring antique furniture. She also enjoyed visiting with family and friends. Ruth went to be with her Lord on Saturday, July 1, 2017 at Webster, South Dakota at the age of 87 years, 3 months and 26 days. She will greatly missed by one son, Fred (Cindy) Wieger of Waubay, SD; one daughter, Barbara (Marvin) Kuras of Silver Lake, MN; five grandchildren, Darla (Larry) Crossley, Fred (Aimee) Kuras, Rebecca (Daniel) Reinke, Jonathan Wieger and Lydia Wieger; and seven great grandchildren, Ean and Amelia Crossley, Cora and Colbie Kuras, Mason, Hugh and Gabriella Hudson. She was preceded in death by her parents, one son, John and a sister, Mary Ann Blashill.
To send flowers to the family in memory of Ruth Wieger, please visit our flower store.