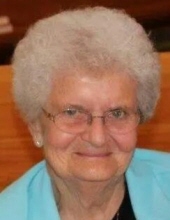 Shirley Schmidt 80 of Roslyn died Monday September 15, 2014 at her home in Roslyn. Her funeral will be 10:30 A.M. Thursday September 18, 2014 at Fron Lutheran Church near Roslyn. Burial will be in the church cemetery. Visitation will be 5 – 7 P.M., closing with a Prayer Service at 7P.M. at the funeral home. Shirley Maye Eidahl was born on Monday October 16, 1933 to John and Agnes (Gilbertson) Eidahl at the Eidahl family farm in Independence Township northwest of Roslyn, South Dakota. She was baptized and confirmed at Fron Lutheran Church. She attended country grade school until the eighth grade. After her education she helped on the family farm and also cared for her disabled uncle. Her tremendous ability to care for others began at a young age. On September 15, 1952 she was united in marriage to the great love of her life, Norman “Tubby” Schmidt at Fron Lutheran Church. The couple lived on several farms northwest of Roslyn until moving to Roslyn in 1964. Shirley worked as a waitress at Northside in Roslyn and at Phillips Café in Webster. Later she became a certified nursing assistant and worked at Strand Kjorsvig Living Center until her retirement in 1995. In 1976 Shirley and Tubby purchased the Roslyn Meat Market and continued to own and operate the family business until 1992 when they sold the business to their son Craig. One tradition started by Shirley and Tubby was “The Meat Market Grandchildren”. Nearly every baby born in the community had a picture hung on the front door and later on a board in the meat market. For the child’s first Valentine’s Day, Shirley would send them a valentine with a dime taped inside! Despite keeping busy with work at the meat market and nursing home, Shirley also babysat for her grandchildren and after retirement, she also babysat the great-grandchildren. Shirley’s family was her pride and joy. She loved Wednesdays also known as, “Schmidt Day!”All Shirley’s children and grandchildren that were in the area would gather at Shirley and Tubby’s house for an evening of love and laughter! Throughout the years Shirley and Tubby enjoyed their cabin at Pickerel Lake, where they hosted many family celebrations. Even though Shirley never got in the water, she loved time spent at the lake. She also enjoyed having coffee with friends and family, shaking dice, and attending sporting events for her children and grandchildren. The last few years Shirley and Tubby enjoyed their time together taking long drives in the country on all the old back roads. Shirley was a lifelong member of Fron Lutheran Church where she was active in Ladies Aide, and Circle. She was also a member of the Roslyn Booster Club and volunteered at Strand Kjorsvig Living Center. Shirley died Monday September 15, 2014 at Roslyn, South Dakota at the age of 80 years, 10 months, and 30 days. She will be forever loved and greatly missed by her husband Tubby of 62 years, two sons, Keith (Donna) Schmidt of Pickerel Lake, SD, Craig (Jackie) Schmidt of Roslyn, SD, one daughter, Marcia (Steve) Schmidt of Roslyn, SD, 10 grandchildren, 14 great-grandchildren, and one more on the way. She was preceded in death by her parents, two brothers, Verlyn and Eldon Eidahl, and two sisters, Jane Holland and Maurine Brendmoen.
To send flowers to the family in memory of Shirley Schmidt, please visit our flower store.