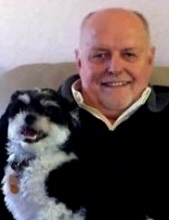 Steven Mydland, 71, of Sioux Falls and formerly of Roslyn passed away of natural causes Wednesday June 10, 2020 at his home in Sioux Falls. Steve’s family will hold a private service and will welcome his friends to gather at the Roslyn Cemetery to celebrate his life at 2:00 pm on Saturday, June 20. In lieu of flowers, please consider making a donation to your local pet shelter in memory of Steve. Although Teddy has found a new home, not all pets are so lucky. Steve was born on May 13, 1949 to Irvin and Dorothy (Nelson) Mydland at Webster, South Dakota. He was baptized and confirmed at Roslyn Lutheran Church in Roslyn, South Dakota. He graduated from Roslyn High School in 1967. Steve then attended Northern State University in Aberdeen, South Dakota where he earned a bachelor’s degree in Art Education. He later went on to earn a degree in Healthcare Management from Southeast Technical Institute in Sioux Falls. Steve taught art and history for several years. He then entered the graphic arts industry and worked at Fireball, Adcraft, and Mitographers. After earning his Healthcare Management degree, he worked at Sanford Hospital until he retired in 2012. After his retirement, Steve moved back to Roslyn until he returned to Sioux Falls in 2015. Steve was a lifelong member of Roslyn Lutheran Church. He was active in the El Riad Shrine in Sioux Falls and was a member of the Tinta Lodge in Langford. He had a great passion for art and music. He enjoyed playing drums and guitar and was a member of The Hillbilly Band and the Oriental Band with the Shriners. He will be missed by his sisters Diane (Dennis) Healy of Lake City, SD and Bonnie (Duane) Snaza of Delano, MN. His nieces and nephews: Jennifer (Corey) Keintz of Eden, SD, Jonathon (Amber) Healy of Brookings, SD, Jack Healy of Telluride, CO, Brett (Karen) Snaza of Long Lake, MN, Cameron (Kari) Snaza of Minnetrista, MN, and Angela (Joe) Zangel of Minneapolis, MN, and great-nieces and nephews: Trevor and Carter Healy, Kate and Drew Snaza, and Amelia Keintz. Steve was preceded in death by his parents and infant sister Kathryn.
To send flowers to the family in memory of Steven "Steve" Mydland, please visit our flower store.