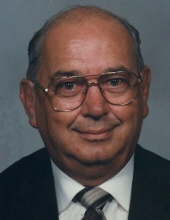 Sylvester “Sy” Herrick, 83 of Webster died on Tuesday, December 27, 2016 at his home near Webster. His funeral will be at 10:30 A.M. Saturday, December 31, 2016 at St. John’s Lutheran Church in Webster, Rev. Mike DeKraai will officiate. Burial will be at Fron Lutheran Cemetery near Roslyn. Visitation will be at the funeral home on Friday 5-7 P.M. A prayer service at 6:45 P.M. Visitation will continue prior to services on Saturday. Sylvester Richard Herrick was born on April 18, 1933 to Anton P. and Julia (Lehmann) Herrick at Grenville, South Dakota. He was baptized and confirmed at St. Josephs Catholic Church in Grenville. He attended St. Josephs Catholic School graduating in 1952. After high school he enlisted in the United States Air Force. He completed basic training in Texas and attended Russian Language School. He was stationed in Germany for the 13 out of 20 years of his service. While in the service he was assigned to the office of special investigation, for which he worked in various branches including the FBI, Secret Service, CIA, and Department of Defense. While working in the Secret Service, he accompanied Mamie Eisenhower in Europe. Sy also worked as an interpreter at JFK’s famous speech at Berlin Germany. In 1973, Sy retired from the military and returned to Grenville to hunt and fish! He stayed with his parents helping them as needed. He then decided to join the Police Academy and take training in Pierre, South Dakota to become a Police Officer. On July 25, 1981 he married Linda Olson. The couple made their home in Webster, South Dakota. Sy joined the Webster Police Department and also worked as a park ranger at Pickerel Lake. He later worked as a deputy Sheriff in Day County eventually taking the reigns as Day County Sheriff for 12 years. In 1991, the couple brought a baby into their family, adopting Jessica. She was the apple of his eye! In 1994, he retired to spend more time with their daughter at their farm north of Webster. Sy thought of himself as a “rancher” raising sheep and horses! He continued to enjoy retirement hunting, fishing, gardening, playing cards, listening to polka music, riding around on his 4-wheeler, but above all he loved spending time with his family. He was a jokester and will forever be remembered for his gift of storytelling and giving his friends and family a “hard time”! He was a member of St. Johns Lutheran church where he served on the church council. He was also a member of the Roslyn American Legion, VFW, and former member of the Peace Officer Association. Sy passed away peacefully at his home on December 27, 2016 at the age of 83 years, 8 months, and 9 days. He will be greatly missed by his wife Linda of Webster, daughter Jessica (Nick) Snaza of Watertown, SD, two sons, Carl Herrick of Omaha, NE and Kenneth Herrick of Germany. He is also survived by three grandchildren, Mallory and Owen Snaza and Travis Herrick, and one sister Theresa Tracy of CA. He was preceded in death by his parents and one sister Marianne Senske.
To send flowers to the family in memory of Sylvester "Sy" Herrick, please visit our flower store.