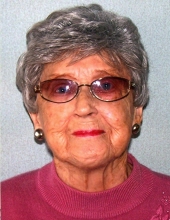 Sylvia Matthews, 91 of Webster died on Thursday, March 17, 2016 at Bethesda Home in Webster. Her funeral will be at 11:00 A.M. Thursday, March 24, 2016 at St. John’s Lutheran Church in Webster, Rev. William Olsen will officiate. Burial will be at Hillside Cemetery, Lily. Visitation will be at the funeral home on Wednesday 5-7 P.M. and prior to services on Thursday at the church. Sylvia Adelaide Folven was born on April 12, 1924 at the home of her parents, Knute and Mabel (Stadsklev) Folven in Lynn Township, Day County, South Dakota. She was the second of five children born. She was baptized at Bergen Lutheran Church north of Bristol. At the age of five she moved with her family to Lily, South Dakota where she received her education at one of the finest schools in the county, Lily High School (Go Wildcats!). After high school graduation she attended Northern Normal College in Aberdeen, obtaining her teaching degree. She then started her forty year elementary school teaching career. First in the one room country school then to Lily town school, Bradley and Webster schools. Her other teaching jobs included many classes of Sunday School and Bible School. Sylvia met the spark of her life in the wonderful town of Lily. His name was Joe Matthews. The couple were wed on June 22, 1947 in the Lily Lutheran Church, the same church they were both confirmed in. After a few years in Bradley they were able to move to the farm that Joe grew up on, which was then their life time home. Because of declining enrollment at the Lily Lutheran Church, Joe and Sylvia became members of St. John’s Lutheran Church in Webster. Here they remained very faithful members throughout their lives. Due to Joe’s declining health they moved to Heritage Village in Webster in March 2009. Joe passed away in August 2009. Sylvia entered Bethesda Home in July 2014. When Sylvia retired from her teaching career she learned to play bridge, which she enjoyed for many years. She was an avid reader. She also enjoyed many hours spent volunteering at Needs Anonymous and quilting with the ladies of the church. She also enjoyed traveling and spending time at both Blue Dog and Enemy Swim Lakes. Grandma’s kitchen was always a busy place. Grandchildren were often found sneaking through the trees to get there for cookies and peanut butter bars. She was always pleased to listen as her grandchildren and great grandchildren learned to read and play the piano. Survivors include one daughter, Mary Jo (Roger) Schaible of Aberdeen, SD; one son, Mike (Kris) Matthews of Lily, SD; five grandchildren, Travis (Libby Huber) Matthews, Clinton (Lacey) Matthews, Lisa (Anthony) Bjerke, Jerod (Brandi) Matthews, and Mandi Schaible; five great grandchildren; a very special sister, Jeanette Knutson of Webster, SD; a dear sister-in-law, Merle Berkland of Hibbing, MN; and many nieces and nephews. She was preceded in death by her parents, husband, and infant son, one brother, two sisters and an infant great granddaughter.
To send flowers to the family in memory of Sylvia Matthews, please visit our flower store.