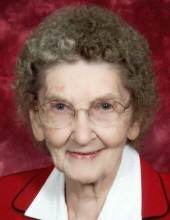 Vernice Johnson, 92 of Webster died on Friday, May 29, 2015 at Bethesda Home in Webster. Her funeral will be at 1:00 P.M. Saturday, June 6, 2015 at Fiksdal Funeral Chapel in Webster, Michael McCarlson will officiate. Burial will be at Saron Lutheran Cemetery near Roslyn. Visitation will be at the funeral home on Friday 5-7 P.M. ending with a 7 P.M. Prayer Service. Visitation will continue one hour prior to services on Saturday. Vernice Victoria Johnson was born on October 13, 1922 to Victor and Mabel (Hunter) Johnson at River Falls, Wisconsin. She attended rural school through the eighth grade. She graduated from River Falls High School and then attended River Falls Teacher’s College receiving her two year rural Education diploma. She then taught for three years in Wisconsin. On November 9, 1945 she married Herbert E. Johnson at the Saron Lutheran parsonage near Roslyn. The couple made their home and farmed in Nutley Township where they raised their four children. In 1960, Vernice went back to teaching in rural schools for eight years. She then worked as a Title 1 aide in the Roslyn School for twenty three years. In 1994 the couple moved from their farm into Webster. Her love of working with children was again fulfilled when she became employed at Little Rascals Day Care. Herbert passed away in 2005. After his death she moved to Pleasant View Apartments where she resided until January 2013. She then became a resident of Bethesda Home in Webster where she resided until her death. She was a member of Roslyn Lutheran Church where she taught Sunday School and was active in Ladies Aide. She also volunteered at Needs Anonymous for several years. Vernice had many interests. She loved to read and many times you would find her sharing and trading books with friends and family. She enjoyed the daily paper crossword puzzles and was pretty hard to stump. She loved flowers and seemed to have a green thumb for outdoor and indoor plants. Many nights you could find her at the kitchen table playing solitaire to pass the time when she was alone. She truly loved working with children and being a teacher. She had many fond memories of her students. She enjoyed being with people and making new friends. To her you were all very special. Her pide and joy was her grandchildren and great-grandchildren. You all held a special place in her heart. Vernice passed away on Friday, May 29, 2015 at Webster, South Dakota at the age of 92 years, 7 months and 16 days. She is survived by three sons, Gordon (Mary) Johnson of Farmington, NM, Rodney (Janice) Johnson of Webster, SD and Tom (Dottie) Johnson of New Prague, MN; one daughter, Nancy (Byron) Bain of Webster, SD; sixteen grandchildren, thirty-two great grandchildren and two great-great-granchildren; one sister, Marian Ekstrom of Bruce, WI; and a sister-in-law, Elaine Chilson of Sisseton, SD. She was preceded in death by her parents, husband, two brothers and three sisters.
To send flowers to the family in memory of Vernice Johnson, please visit our flower store.