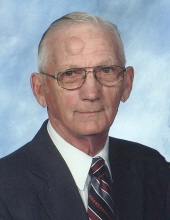 Wallace “Wally” Hanson, 89 of Webster died on Thursday, August 30, 2018 at Sun Dial Manor in Bristol. His funeral will be at 10:30 A.M. Tuesday, September 4, 2018 at St. John’s Lutheran Church in Webster, Rev. Mike DeKraai will officiate. Burial will be at Sunset Memorial Gardens in Aberdeen. Visitation will be one hour prior to services on Tuesday at the church. Wallace Luverne Hanson was born on September 28, 1928 to Lewis and Gladys (Goff) Hanson on the family farm in Butler Township, Day County, South Dakota. He was baptized at Bethesda Lutheran Church in Bristol and later confirmed at Butler Lutheran Church. He attended country school and then graduated from high school. On August 20, 1950 he was united in marriage to Myrtis Jensen at Andover, South Dakota. After their marriage the couple lived in the Bristol-Butler area. In May 1953 he entered the U. S. Army and served stateside during the Korean War. After his honorable discharge in May 1955 he returned to the area and farmed on the family farm. n the late 1960’s he began working for the Post Office in Webster where he was a letter carrier. He later retired in 1990. During this time he also continued for live and farm the family farm. He was a member of St. John’s Lutheran Church in Webster and also was a member of Herbert McKennett Post 40, American Legion. Wally passed away on Thursday, August 30, 2018 at Bristol, South Dakota at the age of 89 years, 11 months and 2 days. Survivors include his wife Myrtis of rural Webster; special friends and neighbors, Brian and Sharil Guthmiller family of rural Webster; and other family. He was preceded in death by his parents, two brothers, Gerald and Vernon and one nephew, Russell Hanson.
To send flowers to the family in memory of Wallace "Wally" Hanson, please visit our flower store.