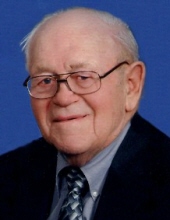 Wendell Hesla, 92 of Webster died on Saturday, March 04, 2017 at Bethesda Home in Webster. His funeral will be at 11:00 A.M. Tuesday, March 7, 2017 at St. John’s Lutheran Church in Webster, Rev. Mike DeKraai will officiate. Burial with military rites will be at Webster Cemetery. Visitation will be at the funeral home on Monday 5-7 P.M. and prior to services on Tuesday at the church.. Wendell Oliver Hesla was born on January 4, 1925 to Swen and Teckla (Brostad) Hesla in White Earth, North Dakota. When he was five years old the family moved to a farm in Highland Township, Day County, South Dakota where he grew up. He attended Highland 186 country school and Webster High School. In 1944 he entered the U.S. Navy and served at the end of World War II and was stationed in Japan. After he was honorably discharged in 1946 he returned to the family farm and farmed with his father and brother, Charles. On December 9, 1947 he was united in marriage to Betty Jeske in Aberdeen, South Dakota. After their marriage the couple made their home on the Hesla family farm where he continued farming. In 2000 they moved to Webster. After they moved to town he continued to farm or help out part-time. He was a member of St. John’s Lutheran Church in Webster, Herbert McKennett Post 40 American Legion and Webster V.F.W. Post 4690. He served on the Highland 186 school board and the Community Oil Company board from 1981 – 1989. He was awarded the FFA Honorary Chapter Farmer. He enjoyed hunting in his younger years and playing cards. Most of all, Wendell enjoyed farm life, helping out his neighbors and being with family and friends. Survivors include his wife, Betty of Webster; four sons, Timothy (Emily) Hesla of Grantsburg, WI, Peter (Sheila) Hesla of Aberdeen, SD, Kent Hesla and David (Rosemary) Hesla both of Webster, SD; one daughter, Janice (Kirk) Markland of Tucson, AZ; six grandchildren and 10 great grandchildren. He was preceded in death by his parents, as well as five brothers, Earling, Atwood, Curtis, Endre and Charles, and an infant sister.
To send flowers to the family in memory of Wendell Hesla, please visit our flower store.